Look Before You Leak - But It's A Lot To Look At !

Heard of Mossack Fonseca ?  Good. That makes it two of us.

In all fairness, Mossack Fonseca would have barely heard of themselves above the din of all that money talking. Well, they are a Panama-based law firm that helps set up offshore, tax-exempt companies.

( Panama ? Okay. Panama is not a hat. It is also not , if you are an Indian of a certain age , a brand of cheap filterless cigarettes. And it is certainly not where Pan Am airline used to be based. It is admittedly a nice Van Halen song but what Panama really is is a country , i.e. a place whose leaders have money stashed away somewhere)

Turns out Mossack Fonseca helped many very important people stash away their money. That includes heads of states, , businessmen, actors, sportsmen, even a 'life coach',... all those sorts of people.

What's intriguing is the investigation that revealed all of this.(read).

While look before you leak is a routine rule in journalism , this case begs the question how.

Stop. I know what you're thinking.

Yes, so  2.6 TB is a lot of Torrent movies and music but consider the larger question. Where would so much information fit ?

I bet Panama isn't big enough to hold it all. Why, for that matter, I bet Mr.Trump's mouth wouldn't be either. And even with 100 participating publications , it must have put everybody through plenty of stress and strife.

Can you begin to imagine, for example, the domestic discord ? ("Honey...." "Not tonight.I have a headache" "Oh ,er, good. I was only going to say I have these documents to go through ?")

And of course it was bound to have put their eyes through considerable strain.

All of which begs the question why people stash their money away instead of spending it on having an insanely great time.

Nobody's talking though. They've all  gone into a shell company.

Posted by Bhaskar Khaund at 4:32 PM No comments:

Ben Innes has it all figured out. When you see a hijacker you shoot. 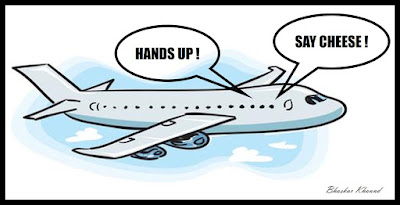 And you shoot without consideration for the havoc it could wreak on said hijacker's psyche  - assuming that more havoc could be wreaked on hijackers' psyches than they already come wreaked with.

Take Mr. Innes' subject. This is one hijacker who must be reevaluating his hijacking career in very critical light. The things they must be saying about him at the Hijacker Club or wherever it is that these people meet for  R& R !

Or, far worse, the You-Can't-Do-A-Thing-Right that he must be subjected to by his estranged wife - to impress whom he had committed this criminal act in the first place !

And considering how Ben and his selfie have stolen so much of the limelight , Mr. Mustafa must feel at least as hijacked against as hijacking.

The only saving grace was that thankfully no lives were lost. Now if only all shootings  in the world were like this.

(This is obviously on a VERY light note )
Posted by Bhaskar Khaund at 5:10 PM No comments:

Space VERY Oddity (or, We know Major Tom's a wino)

(Idea by my friend Vandu)
Posted by Bhaskar Khaund at 3:54 PM No comments:

What Goes Up Comes Down - But Very Slowly

Lifts - or elevators if that's what you call them (though, even if you're American, why?) -  can cause a good deal of pain and suffering. It's not through any fault of theirs - I mean , okay, so lifts are drab places that you wouldn't spend your holidays in but is that even relevant ? It's what some people do with them. Consider these situations from hottest hell :

(1)  People rush in before you have gotten out.
They also then do not hear your sarcastic one liner (e.g., " in a hurry ! ") because they're already busy pressing their buttons.
(2)  People press the wrong button
You're taking the lift down and running very late. The lift stops at some random floor where some woman asks if it's going up. I wouldn't trust her judgement at gunpoint.
(3)  People have pressed all the buttons
Children and ultra-demented adults have often been known to press all the buttons in a lift to make it stop at every floor.
(4) People hold you captive with some really boring talk
You're stuck listening to the guy in the building who may have bored the dinosaurs into extinction. And to make sure you're paying attention he never takes his eyes off yours for a second
(5)  People hold you captive with some really boring talk about their children
That same guy talking about his kids ? Enough said.
(6) People don't keep the door open for you
You've come in needing to use the bathroom. The lift is just about to go up .The person who's seen you rushing makes no attempt to keep the door open as he stares clean past you. What could he have been thinking of ? His own stupidity you hope.
(7)  People can't  keep the door open for you
Ditto the previous situation but this time you spot someone in it who you know. BUT this person is so busy smiling and waving at you that they forget to press the Open button.

So there you are ,  stuck like hell with a bursting bladder , waiting for the damn lift to come down again. What goes up must come down , sure. But  it comes down all too slowly.

Because on the way there must be a woman who's pressed the wrong button and held the lift up or some ridiculously irritating little kid who're pressed all the buttons on it or that life-threatening bore holding everybody off with kid-talk ?

Oh , hang on , not that guy.  Because here he is now , freshly arrived and  by your side , waiting to give you company through the  longest ever ride to the loo in your whole sorry life. And guess what. He's waving his kid's school report cards at you.

Posted by Bhaskar Khaund at 4:26 PM No comments:

Cogito Ergo Sum  - "I think, therefore I am" - said the philosopher Rene Descartes whose name is pronounced very differently. Why not write De-Cart ? Typical !

What Descartes left out was this : think what exactly ? Was he being stylish, mysterious or just careless ? We'll never know - and thank goodness.  Philosophy would have  lost some serious  shine had that line been,say, "I think of shopping therefore I am in the mall."

I wish I'd known about the philosopher Immanuel  Kant's Critique of Pure Reason when I found out that critique and criticism weren't the same. It would have both lessened the shock and illustrated the difference. For Kant's critique is apparently all praise for pure reason.

I'm inclined most towards the philosopher David Hume. Hume is known for empiricism and skepticism. I have no idea what empiricism is - nothing to do,I'm told, with umpiring or even empire -but I'm  skeptical enough to never go anywhere near philosophy. Which is why I should stop here.
Posted by Bhaskar Khaund at 3:13 PM No comments:

"Hail to thee , blithe spirit !  / Bird thou never wert / That from heaven , or near it / Pourest thy full heart / In profuse strains of unpremeditated art."  - Shelley, "To A Skylark"

Now you and I wouldn't think of squawking ,cawing or even cooing as any form of art unpremeditated or otherwise. In fact , a bunch of crows cawing during siesta time on a hot afternoon is the worst thing that could ever happen to one and how different could skylarks be ?

But that was Percy Shelley . (Now that's who I was thinking of when I wrote William Percy Shakespeare (read here) )

Well , Yeats is not on that list because he came later - though I suspect it's really because Yeats is pronounced 'Yates' as opposed to Keats' 'Keats'.

The Romantic poets were some of the greatest minds in human history. Imagine thinking beautiful thoughts in rhyme using 'thou', 'thee' and 'thine'. Not to mention 'o'er' , ''ere' and 'e'en'. Where one usually walks past daffodils without knowing them from Daffy Duck, Wordsworth writes a poem about them. Where one settles in to a state of agreeable inertness after a pinch of opium , Coleridge not only composes a million lines about an ancient mariner but also has it in him to spell it '... Ancyent Marinere'. And show me a guy who knows Ozimandias from Ozzy Osbourne and I'll show you a blank verse (after first finding out what it means)

My only criticism of the entire movement is that Blake didn't pull off the rhyme on his famous The Tyger.  " ... What immortal hand or eye / Dare frame thy fearful symmetry?".  'Eye' so doesn't rhyme with 'symmetry' !  What was Blake thinking ? Probably about flowers or something.
Posted by Bhaskar Khaund at 11:52 AM 2 comments:

Even Hitler shot himself.

Happened decades too late of course but the point is nobody likes Nazis in any shape,form or manner.

So as somebody who can't properly tell preposition from proposition or can't encounter the word 'simile' without the image of a smiley (one nos., yellow) popping in my head, I share everybody's dislike of Grammar Nazis. I mean don't those tight asses have anything better to do ?

Considering I had to google it up before I was sure it's 'apostrophe'  not 'apropstophe',  I was in two minds about writing this piece. Then I drew strength and resolve from the harrowing memory of being assaulted by the following : " I hope he get's the message".

Sure , I'm scarred as hell obviously but alive to tell the tale about the time somebody wrote : "Thanks , your a star". It was all I could do from not replying "Your clearly not." As for 'lose' and 'loose' , that's so rampant  they may as well let the dictionary evolve to accept the interchange.

So hurling abuse on Grammar Nazis works well for everybody. Vitriol is given,correct spelling taken. It's a win win. Nobody looses.
Posted by Bhaskar Khaund at 5:35 PM No comments:

Oops, sorry. Not Percy. That was someone else.

Shakespeare wrote about so many things. What did he not write about ? Smartphones perhaps.

And how prolific he was ! He wrote a million plays and a thousand sonnets and bonnets and God knows how many more are yet to be discovered. Maybe when that spaceship gets to extraterrestrial life after all , they'll find a new one in there. Lots of funny looking life forms quoting from it too.

People are always quoting Shakespeare. Shakespeare is probably the second most quoted person ever after Ralph Waldo Emerson*.  "The quality of mercy is not strained" or " If music be the food of love" and so on.

If William Shakespeare had a Facebook account and had Checked In At The First Class Lounge , they'd have quoted from that too. Imagine a piece about a First Class lounge beginning with something like " As the Bard of Avon said - 'My cup doth runneth o'er / With champagne' "  or something of the sort. Which is why it's fucking wonderful that he didn't.

(* Ralph Waldo Emerson. I've seen entire books filled with RWE quotes. I know nothing about him. I don't know what he looked like. Wore a quote probably ? RWE had a lot of quotes. Great guy to hang with for bad conversationalists like me. Nothing to say ? Non-issue totally.)
Posted by Bhaskar Khaund at 5:37 PM No comments:

Bhaskar Khaund
Hi, I'm a Marketing Communications professional based in Dubai,UAE. I write, in a personal capacity, separate blogs on work, music,cricket and, well, nonsensical nothings. My blogs do not reflect my employers' views. In fact, in some cases they do not even reflect mine while in a few other cases yet , any reflection at all could only be from a well polished surface nearest you ! In any case, thanks for dropping in. Cheers :)